Yarra River at risk of being ‘strangled’ by housing development, pollution, environmentalists say 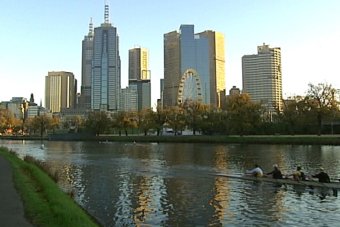 A report has revealed pollution, including sewage run-off, is still flowing into the Yarra River despite decades of clean-up efforts. (ABC TV)

Melbourne’s iconic Yarra River is at risk of being ‘strangled’ by development from housing, despite efforts to clean it up, its riverkeeper says.

Andrew Kelly from the Yarra Riverkeepers Association has joined forces with Environment Justice Australia in an effort to pressure the Victorian Government to act quickly to protect the river and improve its quality.

The groups have co-authored a report showing surface run-off from roads and riverside developments are a leading cause of pollution entering the river, overtaking the historic problem of industrial pollution.

Mr Kelly said the conversion of riverside industrial sites to housing developments is pushing the river’s health to the brink.

“At the moment the Yarra is about to be strangled by over-development,” Mr Kelly said.

“Often industrial sites will actually, the industrial bit of it, only occupy a small part of the site.

“But when they start putting apartments in, it’s usually from one edge to the other edge.

“We’ll lose our animals, birds, insects and reptiles if we fill it all in – you need an edge to the river.”

The report, released on Tuesday, also revealed pollution, including sewage run-off, is still flowing into the Yarra despite decades of clean-up efforts.

The Andrews Government has promised to establish a Yarra River Protection Act and a new trust to harmonise planning controls and guard it against what is deemed “inappropriate development”.

Mr Kelly said the river is at a crossroads, with urgent action needed to protect it.

“The Government has recognised there are problems with the Yarra but one plan after another has failed to fix them,” he said.

“The Yarra is facing so many development pressures and its management is so fragmented that efforts to clean it up are at risk.”

Mr Kelly said the Government needed to implement planning consistency along the lengths of the river.

The Planning Minister, Richard Wynne, said the Act would address that.

“Obviously as a former local government minister I know all those councils very well, so I’m very interested and committed to getting this Yarra River Protection Act up, not only in consultation with local government, but in fact in partnership with them,” he said.

“When there’s a lot of rain, sewage backs up, and rather than backing up into our toilets it’s released into the river,” he said.

Mr Wynne said the Act would be introduced to State Parliament this year.

The Yarra Riverkeepers Association and Environment Justice Australia will hold a community forum at the Abbotsford Convent on Wednesday night to devise a plan to protect the river and improve its quality.

Category: In the News

← Yarra River: still badly polluted despite decades of talk about cleaning it up
Community vision for the Yarra River – responses from the community forum →